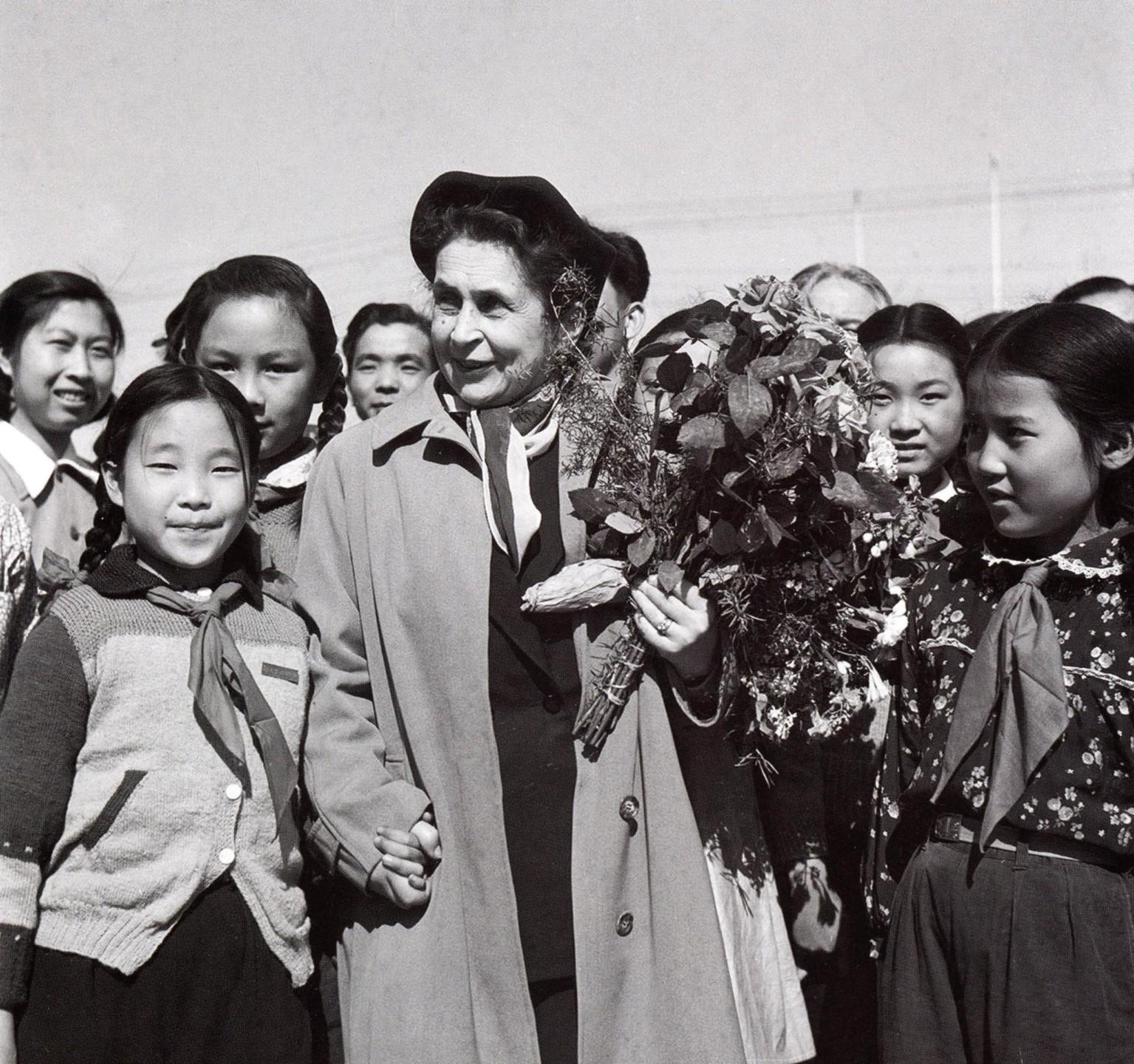 Finland recognised the People’s Republic of China established by Mao Zedong on 13 January 1950. Two days later, a presidential election in Finland took place. A month after Finland recognised China, J.K. Paasikivi was sworn in to his second term as the President of the Republic, and at the end of the same year he turned 80.

From the Finnish perspective, China had long been a distant, exotic “Central State”. With general Chiang Kai-shek at the helm, the Republic of China, which was established following the fall of the Imperial China in 1911, had spiralled into chaos and a state of weakness in the 1920s and in the 1930s into war with Japan who had been the aggressor. After the end of the Second World War, the Civil War continued in China. After the communists gained control in mainland China in autumn 1949, Chiang Kai-shek and his troops retreated to the island of Taiwan.

In June 1950, in the early days of Paasikivi’s second term, the Korean War broke out. The Korean War was fought between South Korea, which was supported the United States and its allies, and North Korea led by Kim Il-sung and supported by Mao’s China and Stalin’s Soviet Union. The Cold War front had now spread from Europe to the Far East and the world was on the brink of a new world war.

Finland and the People’s Republic of China established diplomatic relations and agreed on the opening of embassies in Beijing and Helsinki in September–October 1950, when the Korean War had only started. This gave start to the usual diplomatic routines. In addition to the governments of each country, the respective heads of state, Paasikivi and Mao Zedong, played a key role in this milestone.

Paasikivi maintained from the very beginning that Finland should have a diplomatic mission in Beijing in order to follow up on Chinese politics and to promote trade. The first ambassadors were appointed in 1951, Hugo Valvanne for Finland operating from New Delhi, and General Geng Biao for China, operating from Stockholm. Their successors were the first ambassadors to be based in Beijing and Helsinki.

The Korean War quickly proved a problem for Finland’s foreign policy. Finland together with the rest of the Nordics had been among the first to recognise the People’s Republic of China and to establish diplomatic relations with it. However, unlike the other Nordic countries, Finland was not a member of the UN in 1950. The Soviet Union withdrew from the UN as a protest against the Republic of China’s (Taiwan) UN membership. Finland was presented with the opportunity to join the UN – a membership that Moscow had been against. Finnish politicians, led by Paasikivi, discussed the possibility of joining throughout the autumn of 1950. Eventually, fearing for the Soviet Union’s negative reactions, the decision was made not to join as yet.

Trade and the Olympic Games

The relations between the People’s Republic of China and the Soviet Union also had a bearing in the interaction between Moscow and Helsinki. In December 1949, Mao Zedong travelled to Moscow and stayed there until the middle of the following February when the two countries signed the Treaty of Friendship, Alliance and Mutual Assistance. The Chinese were followed by Kim Il-sung of North Korea, who arrived in Moscow to negotiate support for his campaign to unite the Korean peninsula by invading the southern territories that after the Second World War had remained under US control.

The Finno-Soviet trade talks had begun in Moscow in late 1949, but they ran into difficulties soon after they begun mainly due to the internal political situation in Finland. Meanwhile, the Soviet leadership led by Stalin was preoccupied by the developments in the Far East. It was not until June 1950, three weeks before the Korean War broke out, that Urho Kekkonen, who had become Prime Minister after K.–A. Fagerholm, received an invitation to travel to Moscow to sign a trade agreement between Finland and the Soviet Union and met with Stalin.

The US and its allies had from the beginning limited their contacts and trade with the new People’s Republic of China. In autumn 1950, Mao Zedong sent a large number of “voluntary” troops to Korea to lend support to Kim Il-sung, who was facing defeat. China was placed under a trade embargo by the US and its allies. From that point onwards, if Finland were to trade with China, it would have to strike a balance between Beijing and the Western powers, as the latter expected Finland to join the trade embargo without hesitation.

In 1952 and 1953, Finland became the first Western country to organise its trade relations with China on a basis of an agreement. Finland opened a commercial section in its embassy in Beijing in October 1952, with Olavi J. Mattila appointed as its director. It was vital for Finland to open up new trading contacts, because the war reparations to Soviet Union had been concluded in the autumn of 1952, which concurred with a recession in Western trade.

From the Chinese perspective, Finland held a special position among the Nordics owing to its post-war relations with the Soviet Union, the Finno-Soviet YYA Treaty and the significant power held by the SKP in the politics of Finland at that time. Finland’s position became even more prominent compared to the other Nordic countries thanks to the 1952 Summer Olympics.

The National Olympic Committee had decided at the last minute to grant the People’s Republic of China permission to participate, and the 40-strong national team of China arrived at the Helsinki games when they were nearly over. The most important thing for the new leadership of China was to see the “five-star flag of China fly next to all other nations for the first time in the history of the Olympic Games”.

The seizure of tanker Wiima

In January and February 1953, Paasikivi and the Finnish government found themselves in the midst of a heated international conflict, caused by the Finnish tanker ship Wiima. Wiima was a tanker owned by the Wihuri Group, which was delivering lamp oil from Romania to Shanghai. On her way back, the tanker was supposed to bring sunflower oil to Britain.

Western powers accused Finland of breaking the international embargo. The Wihuri Group attempted in vain to explain that the cargo was not aircraft fuel, which was forbidden under the embargo.

In February, Wiima and her captain and 40-strong crew were forced to interrupt their journey to China and remain anchored in Singapore, which was under British administration. After a stalemate and negotiations of three months, the dispute was resolved and the Wiima sailed back to Europe instead of China.

The US had purchased the cargo of the ship, which was transferred onto American navy tankers operating in the Far East once it reached international waters. After the Korean War ended, sea transport to China remained a politically touchy topic that the Finnish government continued to wrestle with.

In spring 1953, the first ever cultural delegation from Finland to China, formed by members of the Finnish-China Society, travelled to China led by the Prime Minister’s wife Sylvi Kekkonen. The visit of the delegation attracted wide attention in the Chinese press and was the topic of several documentaries. During the May Day celebrations in Tiananmen Square, Prime Minister Zhou Enlai welcomed Mrs Kekkonen, Mauri Ryömä, an MP for the SKP and deputy chair of the delegation, and Ambassador Helge von Knorring. The delegation returned to Finland from its six-week trip only a few weeks before the Korean War ended.

After the military operations had ceased on the Korean peninsula, the situation in the areas near China did not, however, calm down, and would escalate again in autumn 1954. This time the dispute took place over the ownership of the Taiwan Strait islands as the US and its navy supported the government of Chiang Kai-shek. President Dwight Eisenhower threatened to use nuclear weapons against China unless Beijing rescinded its territorial demands.

The conflict was resolved in spring 1955, when Prime Minster Zhou Enlai acted in a conciliatory manner at the Asian-African Conference in Bandung, Indonesia, and offered the US talks to end the conflict that had lasted several months.

The episode saw the beginning of a “new thaw” in international politics. The US, Britain, and France as well as the Soviet Union, who had been allies in the Second World War, participated in the Geneva Summit in July, also attended by President Eisenhower and Chairman  Khrushchev

In autumn 1955, the Soviet Union was ready to return the leased area of Porkkala to Finland, which is when the YYA Treaty was also extended by 20 years. In the Far East, the Soviet Union withdrew the last of its troops from Port Arthur Naval Base, which since the end of the Second World War had been under the joint use of China and the Soviet Union for a period of ten years.

During the last year of Paasikivi’s presidency, 1955, Helsinki hosted the week-long annual conference of IPU, the Inter-Parliamentary Union, which had been established in 1888 and was headquartered in Geneva. The conference was attended by more than 500 international delegates, addressed at the opening ceremony by President Paasikivi. As the host, Finland had invited a delegation representing the National People’s Congress of China as an observer of the conference.

The esteemed Chinese entourage was well looked after in Helsinki. Immediately at the start of 1956, the Finnish Parliament received an invitation from Beijing for a reciprocal visit to the National People’s Congress. A Finnish delegation of twelve led by Speaker of Parliament V.J. Sukselainen travelled to China four months after the end of Paasikivi’s term as president. This was the first delegation to participate in the official exchange between Finland and China.

During Paasikivi’s presidency, the foundations for the relations between Finland and China were laid, including trade and cultural relations. In China, Finland was perceived as a Western country among the other Nordic nations. All Nordic countries gained political capital by being among the first to build relations with the People’s Republic. Moreover, the Nordic countries supported the One-China Policy and the membership of the People’s Republic in the UN Security Council. Finland’s special status in China compared to the other Nordic countries continued until the end of the 1950s. The Sino-Soviet Split and the deep ideological rift between the two narrowed Finland’s room to manoeuvre in its policy towards China. In the 1960s and thereafter, Finland fell far behind the rest of the Nordics and other Western countries in developing its relations with China.

Arto Mansala has served as State Secretary in the Ministry for Foreign Affairs and as the Finnish Ambassador in China in 1989–1992. His book Asemapaikkana Peking [Stationed in Beijing] was published in 2020 (Siltala).